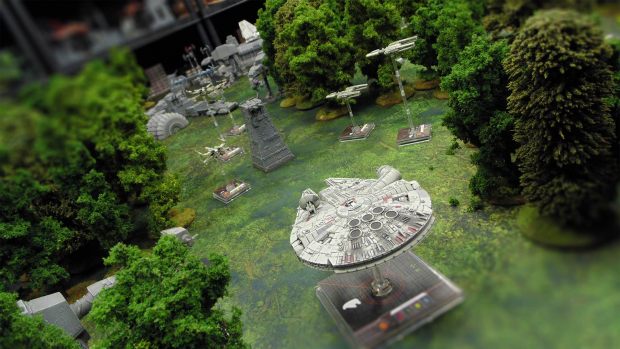 I recently played DungeonQuest for the first time. Talk about a death wish! One turn in and nearly all of my hit points were gone. My opponents didn’t fare quite as well and within three turns they were off to the great dungeon in the sky. I soon joined them and after we regenerated our characters, we suffered similar fates.

Hopefully your gaming this week went better than mine. Here’s what’s been happening throughout the cardboard community. Tweet me @RuelGaviola with feedback or any board gaming news.

Extra Life
Started in 2008, Extra Life sponsors a 24-hour gaming marathon to raise funds for Children’s Miracle Network hospitals. This year’s game-a-thon is November 7th (although you can play on any day you’d like). Start your own team of gamers to be sponsored or join boardgamegeek.com’s team.

Endor in a Day
Did anybody catch the trailer last week for a certain movie featuring X-Wings, light sabers, and Wookies? If you’re as pumped as I am for Episode VII, then check out how this group of dedicated fans transformed the X-Wing miniatures into a Battle on Endor game. It looks amazing (photo above), especially considering that they did it all (including writing some new rules) in one day.

Mob Movie
A social deduction game on the big screen? Yes, Mafia the movie is on its way. No, Robert DeNiro or Al Pacino are not starring in it.

Essen-tial
Now that Essen is over, take a look back with Andrea Roth’s photo essay. Or read Allen O’Connor’s blog. Or salivate over all of the hottest games from the convention as listed by Emile de Maat.

Magic-al Wedding
This young lady used her love of Magic: The Gathering to propose to her boyfriend.

Top 5 Board Games Cafes in Toronto
One day I hope my hometown can have a list like this.

Play It Forward
Created by 16-year-old Harry Lee in 2009, Sneaky Cards is a social interaction card game that’s played in the real world. From connecting with strangers to doing good deeds, this latest version of the game features new artwork and challenges. The old version is available as a free print-and-play.

This site uses Akismet to reduce spam. Learn how your comment data is processed.